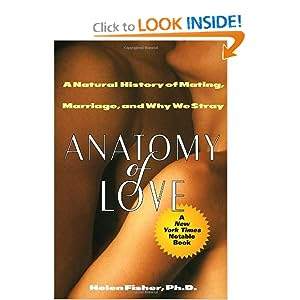 A summary of Helen Fisher main ideas can be found in this TED talk.  I love it how she ended with a love story that just simply demonstrates despite how we apply science to love - there is still an unexpected, unmanageable surprise to it!

Here are some notes from the Anatomy of Love:

Why divorce often occurs after 4 years of marriage and not the 7 years itch:
1. According to UN data, the common period of divorce throughout the world is 4 years, though there are exceptions – like when there are arranged first marriages, the divorce tend to come earlier. Fisher looks at marriage and divorce in 58 societies and adultery in 42 cultures to explain the “four year itch”—an ancient human tendency to marry and remarry

2. Bipedalism could be very responsible for the the evolution of husband and wife. We could have been living in harem like monkeys but with the females taking care of the young only. When we became bipedal and came down from the trees to walk on the plains, our young can no longer hide in the safety of the trees nor ride on the back of the mothers – therefore the mothers have to carry their young in their arms.
3. Hence the females needed the males to raise the young as they can no longer cope alone. In the early days of our ancestors, the food of nuts, meats were spread over a large area and hence the male cannot attract enough resources to collect a harem, he could perhaps though help a female to raise the young through monogamy.
4. Studying animals like the red fox and robin, we find that animals pair up simply for the breeding season – just long enough to raise the young through infancy.
5. For a female in the traditional hunter gatherer society, the female has to breastfeed the child. Through this effect, ovulation is suppressed and ability to conceive is postponed for about three years and therefore the births are about 4 years apart.
6. When the children reaches for 4 year old in the hunting-gathering society, he can join the play groups where older siblings, relatives and friends help to take care of the young. The mother need not carry her infant with her all the time and nurse the child all the time – the dependence on her husband decreased.
7. As we all know, divorce becomes more common when the males and females are less dependent on each other. The thing to take note is that in the hunter-gatherer society, the females are also capable of gathering sufficient food to be self-sufficient. With the onset of agriculture, men are needed to do most of the heavy labour, increasing the dependence of women on males.

Here is another reason why u should support equal women rights:

Because we are just moving back to the past. Women used to socially, economically, sexually powerful as men in the early hunting, gathering society.  Especially they used to bring back 60% of the evening meal in our hunting and gathering society - this was also mentioned by Jared Diamond.

The thing about men's private parts:
1. Length – simple to compete like that of the chimpanzee.
2. Thickness – could be that it distends the muscles of the outer third of the vaginal canal and pulls on the hood of the clitoris, creating friction and making orgasm easier to achieve.

The story about our hair:
1. Why is the hair on our body so short? Some suggest it is so as to enable the cooling of the body with sweat.
2. The suggestion is that human hair patterns serves as sex attractants. The lack of hair around the lips and breasts – where stimulation can lead to intercourse; the presence of hair in the armpits and crotch traps the aroma of sweat and sex, these suggest that our hair has a role to play in human sexuality. The appearance of hair patterns during puberty further supports it as a form of sex attractant as the hairs are not important before puberty.

The story of female orgasm:
1. Female can have multiple orgasms if she knows how to. Why?
2. Female orgasm boosts the male ego, reassuring them their partner is satisfied and less inclined to look for other partners.
3. The feelings that the female experience during orgasm also cements the relationship with her partner.
4. The satisfied female is also motivated to remain lying down, and sperm is less likely to leak out of the vagina. It also stimulates the females to seek more copulation, hence facilitating conception too.

The story about teenage puberty and sex:
1. In prehistoric times, puberty occurred around age 16/17 – followed by 2 years of irregular ovulation (adolescent subfertility).
2. Hence they can copulate without the risk of getting pregnant.
3. However, now the fatty diet and sedentary life-style have raised the critical body weight and tricked the body into early puberty.