GuiZhou Trip duing the May holidays 2006 Part I 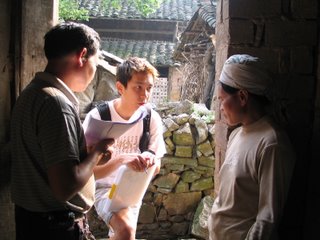 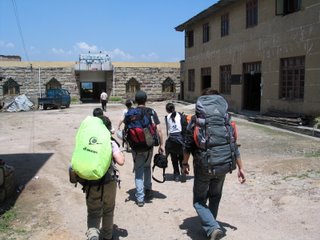 During the May holidays, I went with another charity organisation called Guizhouren.net to Guizhou. Guizhou is the most mountainous province in China and it has the lowest per capita income of the provinces in China. This organisation looks for individual donors who sponsor a kid each through school and encourages exchange of letters between donors and the children. Once a year, volunteers like me will visit the area to verify that the money are put to proper use through conducting surveys as well as to take pictures of the kids so that the donors are kept updated of the conditions of their kids.

First day 02/05/06:
Finally, we arrived at 谷陇站 about 12:30 pm, right in the midday when it was scorching hot. I must admit that I have not seen many train stations in China, but most of those that I have seen had at least a little platform and shelter for passengers. However, for this station, there was no indication at all that this was a station, it was as if the train just stopped in the middle of the tracks and beside the tracks, happened to be a couple of buildings.
Moving along the street to our van, swarms of flies buzz around us and basically around everything. The scorching heat which “cooks” the smell, pieces of rubbish littered along the ground, and a little depression along the middle of the street where a dark, putrid liquid flows; this was my first impression of 黄平.
at 10:24 pm
Email ThisBlogThis!Share to TwitterShare to FacebookShare to Pinterest

wah. i really envy you man. can get to do things that you enjoy. do keep updating, the photos were nice.

wah. impressed.
u reali made full use of yr time there.
guilt.