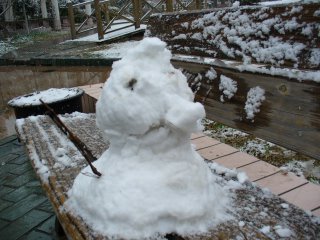 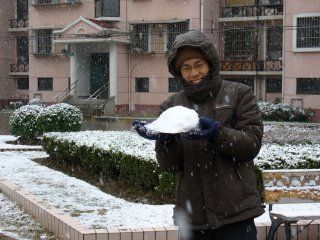 It was snowing in Shanghai on the 180206. The first time that i have ever seen so much snow and played with for the matter.

Well, i was honestly not too keen to play with it as i was getting sick of this cold but as my flatmates were all keen, we went down to play like kids.

Throwing snowball, building snowman(mini), it is all part and parcel of the fun of snow..

This snow only lasted like 2 hours and it is a RARE phenomenon in Shanghai. Apparantly it has only started snowing last year, before that it has not snowed in Shanghai for a long time.

What i had a greater impression of was running in this darn cold weather.
Once, when the temperature was 10 degrees outside, i dorn my thermal wear layer, worn another long sleeve and pants over it, armed with gloves and caps, i went out to run after working out in the house.

In less than 7 minutes, I was back in the house. As you run, the cold gets into your nostrils, lungs, blabla and i found my nose leaking badly.

When i got home too, my heart was still beating very fast and my chest still feels as if it still had cold air inside. Maybe it was a dangerous thing to do cause i just felt asleep as i laid on the ground to rest. I could have slept forever for all it matters. hahahaha..

just another memorable thing.
at 10:07 pm
Email ThisBlogThis!Share to TwitterShare to FacebookShare to Pinterest

Wrap your face with a scarf! Can double as a hanky! Stuff the rest of the scarf to the back of your neck for added shiokness. Or you can just give up and stay next to the radiator.

Wrap your face with a scarf! Can double as a hanky! Stuff the rest of the scarf to the back of your neck for added shiokness. Or you can just give up and stay next to the radiator.

Cousin,
The weather seems awesome compared to the crazy heat here.
Hang on in there at work,hopefully things will start looking up!

Hey Marcus, u've definitely got great time there! Dun worry abt graduating late cuz it's worth mah.. All the best!!