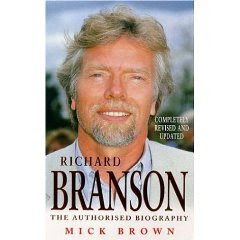 Basically, this book give us a more complete, down-to-earth view , complete of Richard Branson as compared to Richard Branson's autobiography:
- In the autobiography, we tend to get the feeling that Branson just went ahead to do all his adventures, however for example, in this book, you will come to learn about the opposition from his family, learn about how the bad weather actually allows Branson to pick up the neccesary knowledge that he hasn't had the time to learn previously and yet so crucially important for his survial.
- About how it takes more than Richard Branson to be Richard Branson. The child is the father of the man. For branson, his mom had this motto: "Why watch what others have accomplished? Go out and do something with your life!'". He had a mother that encouraged her children to perform in front of others, hence explaining Branson's gift for public attention.
- More about his failed attempts such as the National Lottery.
- More importantly, Branson's own search for meaning of life when he hit 40 and hence contributing efforts during the IRaq crisis. He came to view that there is more than creating a business empire to being a meaningful human being.


All in all, I am glad that I read 2 other books about Branson than those written by him - this one by Mick Brown and the " Business: The Richard Branson Way - 10 secrets of the world's best brand builder".

There is more about Branson than his appetite for adventure, fun and altruism. There is the real negotiator in him. Branson does not come naturally, his childhood environment played an important role in him being so action packed and full of initative.

As I told Ivy, he is my idol. In the past, I respected him for the sense of adventure in him despite being a billionaire, for taking on the big boys and creating value for the consumers, for not being a stuff shirt and having a small consideration for material life. Now, I have to love him even more because he has pledged efforts in the environmental area - the concern of my life.
There is almost nothing wrong with him, except about breaking up couples to win his girlfriend and current wife. However, what else do you want out of life when you have all the fun, the adventure and lots of sex to top it up?
at 10:01 pm
Email ThisBlogThis!Share to TwitterShare to FacebookShare to Pinterest
Labels: book review, richard branson

Keep up the good work.