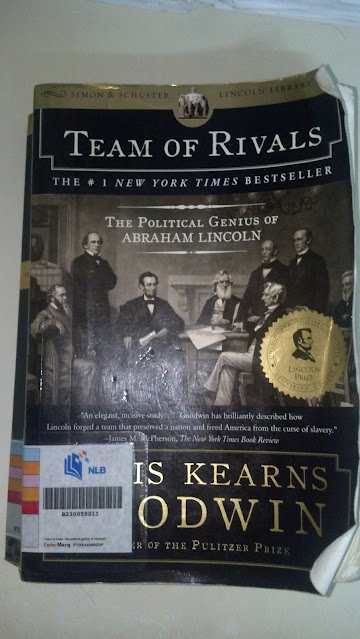 For weeks, I have resisted reading this book because I have got so many other books to read.  In the end, tired from all the serious books I was reading, I relented, and boy what a trip!  It was so enjoyable to read, and like a story, you can be kept turning on page by page.

This is also a unique biography cause 4 people's lives are being developed at the same time, almost all biographies I read centre around one person. The writer took time to describe the childhood and background of each of the 4 characters: Lincoln, Seward, Chase and Edward Bates. Of course, though Edward Bates seems to fade out in the end, but there is the fiery Santon to replace him.:)

The contrast in the four characters also brought out interesting points such as the importance of the childhood:

1.              Death of Chase’s father forces young salmon to exchange the warm support of a comfortable home to the rigid boarding school of a domineering uncle, a man who bestowed or withdrew approval based on performance. As such Chase had an insatiable  need for acknowledgment and the trappings of success.
2.              Edward Bates whose family of twelve was scattered by his father’s death, the loss engendered a lifelong urge to protect his family in ways that his father never could. To his wife and 8 surviving children, he dedicated his best energies, even at the cost of political ambition, for his happiness depended on his ability to give comfort to his family.
3.              Abe Lincoln inherited from his father a quick wit, talent for mimicry and an uncanny memory for exceptional stories. While Lincoln as 6-7, he listened to how his fathers swap tales with visitors and neighbours. After translating the stories into words and ideas that his friends could grasp, he would mesmerize his own circle of young audience.

Unlike other biographies that sometimes I endure through it because I want to learn more about the person, or that person life has many adventures that keep me hooked, this biography is really like a novel. Maybe it is because the men of the time like to write letters or diary, so there were conversations that were lifted out and you didn't just have the dry narration by the historian.

Add to that, men of the time all seem to have quick wits and sometimes, I find myself just giggling away.

If this is a novel, then my favourite character that brings the most laughter is Edwin Santon.
Here are a few episodes:
·      Unwilling to wait a minute longer for a plan he thought up, Edwin Santon wakes Lincoln, Seward and Chase for a meeting just before midnight. Upon approval, Santon works 48 hours straight to commander trains for military use and acquiring provisions. He accomplished the largest, and fastest of a large body of troops before the 20th century and saved Chattanooga from the Confederates hands.
·      2nd day as Secretary of War, Santon tore up the note of a man who was recommended by Mrs Lincoln for a job. The very next day, the man returned with an official request from Mrs Lincoln. Santon still sent the dude off, called on Mrs Lincoln and said. " In the midst of a great war for national existence, my first duty is to the people and next duty is to protect your husband's honour and your own. If I appointed unqualified people simply to return favour, it would strike at the very root of confidence. "
·      When Fesseden was reluctant to take up the treasury post in consideration of the workload, mentioning that the duties of the post will be his death.  Santon rejoined, “Very well, you cannot die better than in trying to save country.”
·      After he coldly rejected a family begging for mercy for a soldier who was to be shot for desertion, he was found wailing privately in sobs “ God help me do my duty.”

There is really a role for all sorts of people:

The blunt, impatient Santon is the same person who gets annoyed with Lincoln saying one of his silly stories again at the crisis of Chattanooga is the same person with that boundless energy and intensity to work 48 hours straight.  As Lincoln says when others ask to replace Santon in the cabinet, I can't find a man with his strengths but without his defects!

And on Story telling: Lincoln didn't tell stories for fun but to use it to relate a point that logical arguments may have problems doing so. Gracefully educational while entertaining, communicating an enormously complicated issue with wit, simplicity and a massive power of moral persuasion.  The point, which he wishes to reinforce, is invariably brought home with a strength and clearness impossible in hours of abstract arguments.  The most famoust story/analogy is the snake/slavery arugument found here.

The bromance between Lincoln, Seward and Santon was also very touching:
·      As Seward laid on the bed from an injury, Santon woke Seward up even though it was 10pm to tell him the news that General Lee has surrendered. As Seward had a jaw injury, hence Santon told him to not try to speak. Seward replied “ You have made me cry for the first time in my life. “
·      The night that Booth shot Lincoln, one of his collaborators stabbed Seward, and, while Seward was recovering, the news of the President’s death was kept from him. The way he figured it out is heartbreaking. “If he had been alive he would have been the first to call on me,” Seward said to his attendant one day as he gazed out the window, “but he has not been here, nor has he sent to know how I am, and there’s the flag at half mast.”

The other things I want to remember about Lincoln are:

Though the cause be “naked truth itself, transformed to the heaviest lance, harder than steel” [Lincoln said], the sanctimonious reformer could no more pierce the heart of the drinker or the slaveowner than “penetrate the hard shell of a tortoise with a rye straw. Such is man, and so must he be understood by those who would lead him.” In order to “win a man to your cause,” Lincoln explained, you must first reach his heart, “the great high road to his reason.”

2.  Lincoln near mad experience on page 100.  Lincoln: “ In time of anxiety, it is critical to avoid being idle and business and conversations of friends were necessary to give respite from the intensity of thought, which will sometimes wear the sweetest idea threadbare and turn it to the bitterness of death"
3.              Page 104 Lincoln’s gift of political diagnosis was due to his sympathy, he possessed extraordinary empathy. That allowed him the capacity to deduce the feelings and intentions of others.
a.     Interestingly, this was also what was mentioned about Steve Jobs in his biography. It was not that he was plain rude, he knew what buttons to press.
4.              How Lincoln is known to people all around the world and regarded by even a remote trip in North Caucasus as the greatest ruler of all times as narrated by Leo Tolstoy

at 7:42 am
Email ThisBlogThis!Share to TwitterShare to FacebookShare to Pinterest
Labels: Abraham Lincoln, book review