Balloons from " I Love Singapore" Run

LIke SK Wellness, I believe in geting fit and hence I was doing a round Pulau Ubin Canoeing on 10th November afternoon.  That was where I spotted: 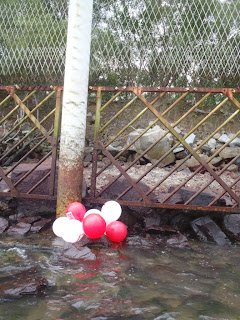 Since the morning event, these balloons from " I Love Singapore Walk" has landed at the northern coast of Chek Jawa of Pulau Ubin, far from its release point at Marina Bay.   Many Singaporeans love Chek Jawa on Ubin for its natural heritage, such that thousands appealed to the government in 2001 to preserve Chek Jawa when it was planned for reclamation.

In addition, much of the trash in the seas end up being eaten by animals.

I understand the need to create the festival atmosphere at an event, however SK Wellness may like to consider other alternatives to releasing balloons to be line with its objective of being socially responsible.

at 7:30 am
Email ThisBlogThis!Share to TwitterShare to FacebookShare to Pinterest
Labels: Letters submitted