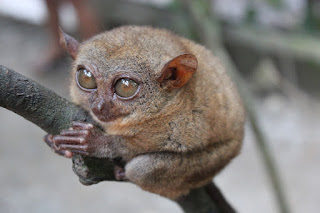 Like the Tasir above with Big Eyes, Ears and a small mouth - the way organisations use social media should be to see more, listen more and speak very little.

That was the main takeaway from the "Using Social Media – Returns on Investment and Attention Talk" organised by SG Cares given by Andrew Shaindlin.


Hence what is the purpose of ICCS social media strategy?
- To create a sense of community or as another avenue to announce events?

ICCS  already enables the involvement of the community because the Facebook settings are that everyone can post to ICCS timeline - it is not one that only the administrator can post.

Oh, by the way, even if we need to use to announce events, do it a casual tone. People didn't sign up to facebook to get another official email like update.

However, if the purpose is simply to create a greater conversation about ICCS especially through Facebook, it is already happening because I know of groups like Oscar who used Facebook to share their pictures.

Unless, it is our aim to direct people to the ICCS Facebook Page (so that from there they can learn more about the organisation/cause), then we may want to like to inform organizers that they could upload one photo and tag one friend on the ICCS Facebook page as homework.

The reason being that the ICCS community may not be aware that they can post on the ICCS Facebook page in the first place.

First theme: Change in the direction of flow in information

1. Publish first and then filter later
2. Control of filter is passed down from higher levels to lower levels communications.
3. Members can now send information to each other without going through the center of command.

Hence: Your messages should not be crafted as an announcement but as a message that will get discussion started.  It should be something that friends will say to each other.

Second theme: Learning from our audience

Now it is easier to hit reply to organizations and that gives the organisation a change to learn quickly from its audience.

Now there is a listening post. Listen for clues about what really matters to our audience.

The metaphor of your social manager is a Tasir: Listen more, see more, speak very little.

There is no need to response to every single negative comment, but don't speak down to your audience as an authority.   Communicate as an equal, as they are on social media to talk as friends.

We can easily get caught in the motion that we must have an online presence.

IBM director of Linkedin was asked:”How do you measure the value of your Internet linkedin presence.”

He answered: “I don't know , how do you measure the value of your phone system in your organisation.”

Quantifying the exact value of your social network may not be a good use of your time.

Maybe we shouldn't use ROI, but ROA - return of attention.

Instead of getting more people to follow us, increase the value of current followers.