3 books about Lincoln in a row:

The biggest overview on Emancipation:


It was like a big juggling game and showed how Lincoln is a masterful politician:

It is a book about a famous person written by another famous person, read the Chinese version cause I couldn’t lay hands on the English one.

When it is mentioned that Lincoln stayed a wooden cabin when he was young, it wasn't a nice camping log cabin, it was like a makeshift house with 3 sides wood and one side with just plain animal hide covering.

Interestingly, 2 of the most important men in the US Civil war did not find success until late in their lives.   In fact, General Grant owes people so much $ that people actually avoided him.

Crazy wife and how much Lincoln loved Shakespeare – makes me want to read too in order to craft speech with poise.

Lincoln's secretary: Lincoln reads less than 1/50 of the letters he receives and writes at most half a dozen of letters a week

Lincoln was just issued a generic invitation card to the Gettysburg. When he responded, the organisers scrambled. Hence, they invited Lincoln to only "say a few words " because the program already had a 2hour speech by the great orator. The rest is history.

It was also interesting to read that Lincoln embarked on emancipation to turn the Civil War from merely an issue of US national sovereignty to one of a moral issue. Otherwise, France and UK will just support the South as it is merely an issue of power struggle and benefits from siding with one ally. By releasing emancipation and turning it into a moral issue, the government of UK and France will face pressure from their public.

It was when the rulers of UK and France were keen to recognize the South, that it is important to change the focus of the Civil war from a political issue of preserving the Union to a moral issue of slavery. In this way, the people of UK and France will not agree to their rulers supporting a country (The South) that advocates slavery. 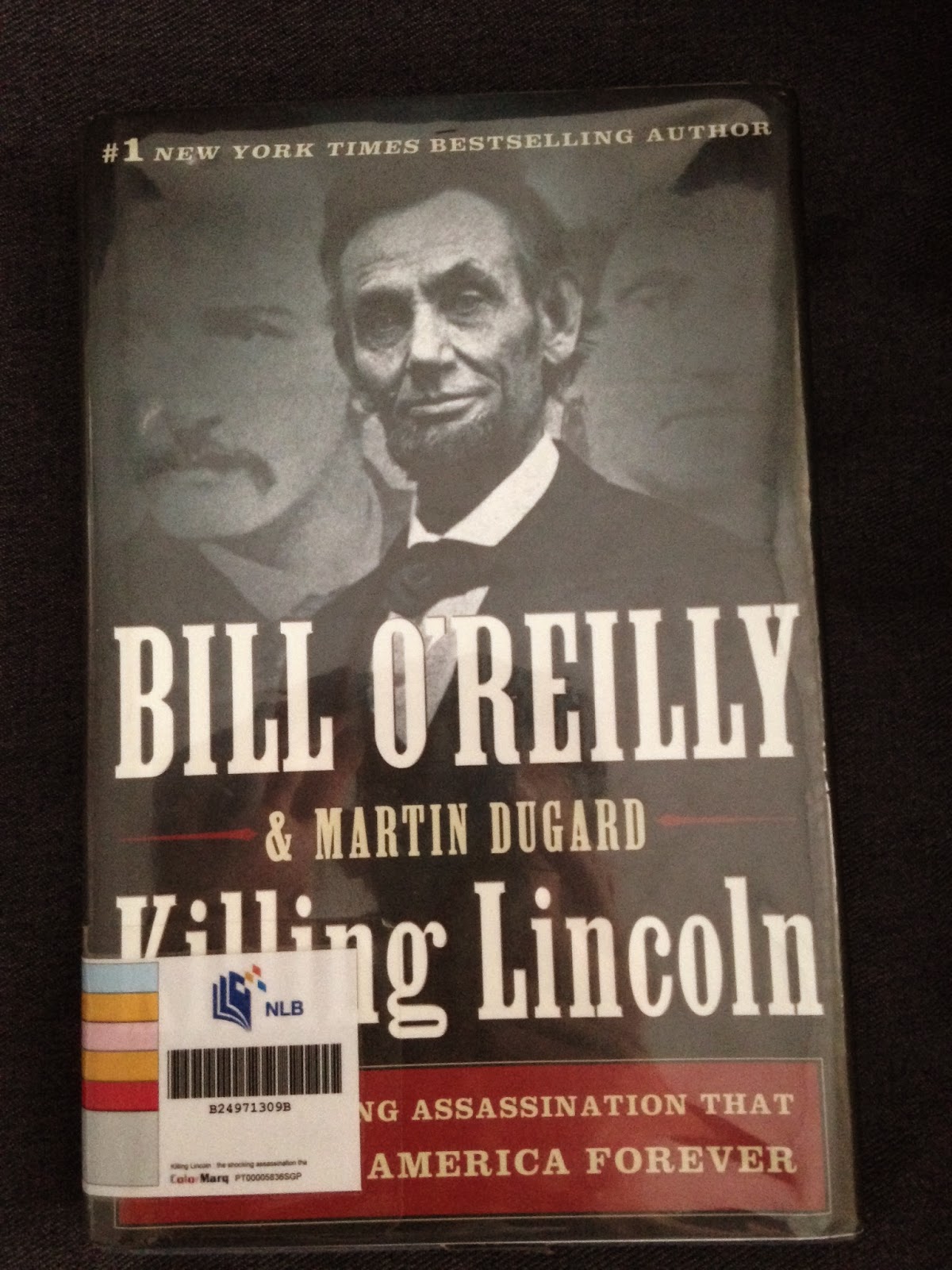 The sheer agony of the US Civil War: how Lee men marched for days without food or sleep to escape General Grant. How men just dropped into the woods to escape the army and drop off dead along the way.

The other strong impression is how the doctor had to keep digging his finger inside Lincoln head to ease the blood flow and clot inside the head.

Lincoln 3: Emancipating Lincoln: The Proclamation in Text, Context, and Memory


Pg 66: Lincoln "I will concede that emancipation will help us in Europe and convince them that we are incited by something more than ambition, even if it was for the grand idea of constitutional government."

Lincoln had laid down a long, long preparation road for emancipation: Lincoln exaggerated his commitment to colonization to prepare the country for unthreatening freedom.

Lincoln also cited his overall goal to be reunion rather than liberation, and reiterated his commitment to gradual emancipation in the loyal slave states and to voluntary colonization of "persons of African descent". The result is rhetorically bland enough to hold critic in check, legally sound to survive threats of court challenges, and militarily sound enough in promising the underachieving Union Army a new infusion of manpower. 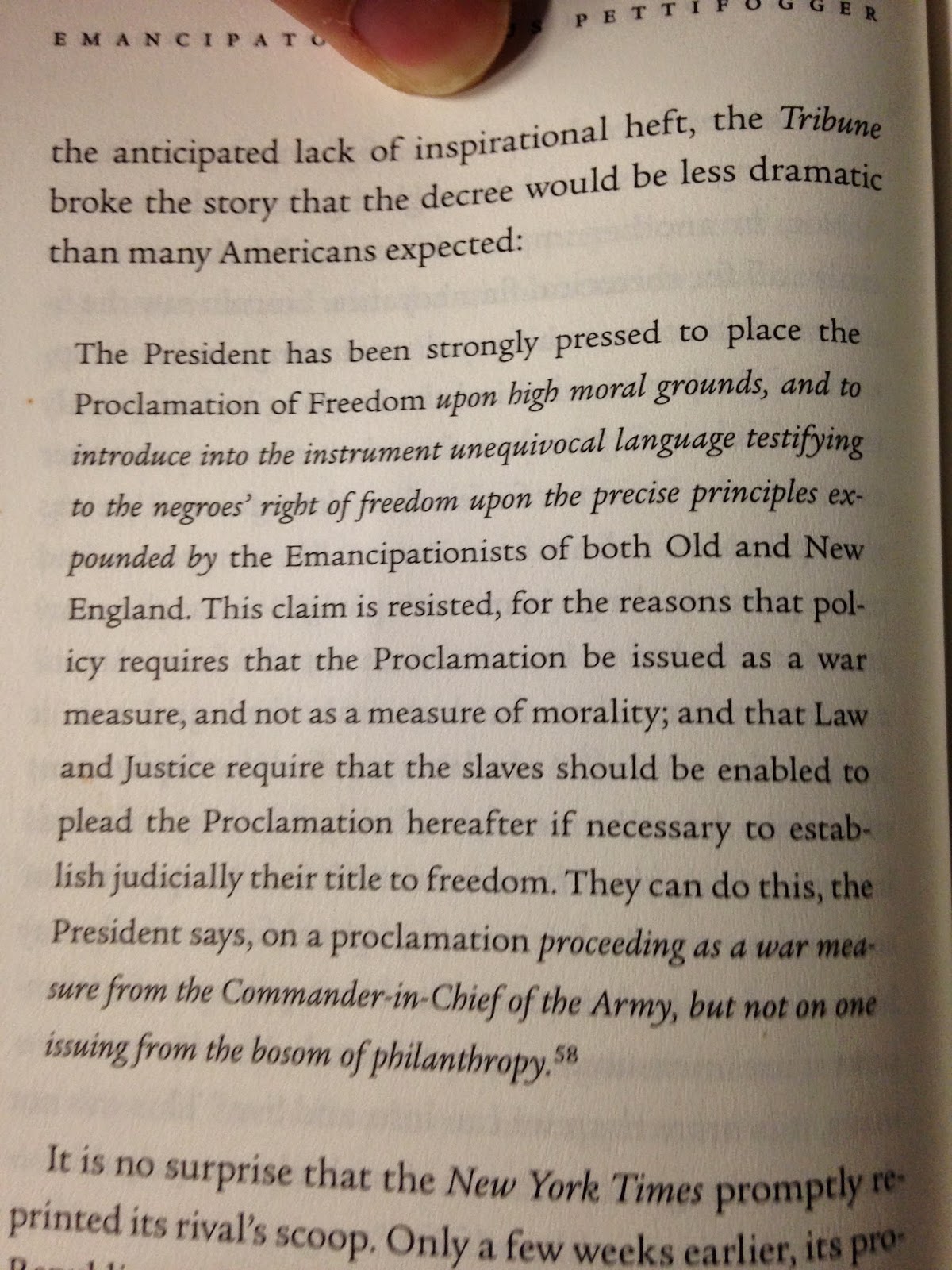 New York Times editor, Henry j. Raymond in a letter to Lincoln: "Any attempt to make this war subservient to the sweeping abolition of Slavery, will revolt the Border states, divide the North and West, invigorate and make triumphant the opposition party, and this defeat itself as well as destroy the Union.

Instead, use the emancipation within the limitation of law, against rebels as a military weapon purely and exclusively, will be sustained by the whole country, Border states and all. Thus will avoid the public odium and dissension inevitable in a more sweeping and less guarded movement. Caution would free just as many slaves and thus attain the same practical results.

The only drawback I can think of is, that such a mode of reaching a result will not suit those who seem the mode of more importance than the result itself."

at 11:16 am
Email ThisBlogThis!Share to TwitterShare to FacebookShare to Pinterest
Labels: Abraham Lincoln, book review